Jana Johanna Häckel is a Berlin-based curator who’s worked for the Verein der Freunde der National Galerie as well as the Boros Collection, and will soon begin a ph.D position in Brussels. Her most recent exhibition “Languages of Revolution” is now on at Kleine Humboldt Galerie in Mitte. The exhibition features artists from nine different countries, with each artist showing works related to the global protest movement which was sparked by last year’s Arab Spring. I sat down with her to talk about the artists’ works and their relation to Berlin’s art scene.

How did the topic of the exhibition develop?

JH: The starting point was a reflection on the events of the Arab Spring and the revolutionary movements that followed, from London Tottenham to Madrid and Greece, for example. Very emotional discussions soon came from philosophers like Slavoj Žižek, but also artists like Wolfgang Tillmans expressed their thoughts. In the beginning of 2012, the Frankfurter Kunstverein exhibited artworks dealing with the topic of demonstrations, and this weekend we saw the opening of the Berlin Biennale, curated by Artur Żmijewski in cooperation with the Russian artist group Voina, whose approach is notedly political and revolutionary.

My personal approach to the topic began with Stéphane Hessel’s “Indignez-vous,” a kind of pamphlet published in 2010 which was quickly adopted by a lot of groups aspiring to create a revolutionary movement. What’s so interesting about this is that these groups emerged all over the world, so despite them having a very different cultural and historical background, they all found something useful in the same pamphlet by this French author. I started to think about the role and the value of language, how it’s used in the context of revolutionary motivation, which in the end led me to the issue of languages of revolution.

Have you seen a politicization of art since the Arab Spring?

JH: To me the shiny 90s and early 2000 design art aesthetic is becoming less and less interesting and I personally would favor a development towards political and explicitly critical art. I’ve lived in Berlin for the last ten years and of course the situation for the production of art has been changing. It’s becoming increasingly difficult to find cheap living and working spaces for example. And I would like to see a reflection of those current processes and changes in the work young artists create.

Would you say Berlin’s art world is unpolitical?

JH: The art world here is on many levels connected to the hedonistic party life Berlin is so popular for. So of course the art scene is a lot about partying, whereas for example in Düsseldorf, where I’ve just spent some time as a curatorial assistance at K21, a vernissage is a very serious and wealthy event. As much as I enjoy Berlin, the conditions for a hedonistic lifestyle are changing due to the rise of cost-of-living and this will in the end effect the way art is produced.

DN: I haven’t seen too much a shift away from party culture in Berlin though. To me, it seems like it’s increasing even.

JH: Besides economic reasons, I also see some kind of slowly emerging fatigue with hedonism, at least in myself. I think Berlin would benefit from becoming more adult, from shifting away from solely partying and consuming.

The exhibition features artists from nine different countries. What was your criteria for selecting the artists who would participate?

JH: For me it was very important to create a group show with works by artists of different generations and different cultural identities and not just to rely on my network of friends of friends, as is too often done in the art-world. Some of the works I exhibited were recommended to me through discussions I had with other artists, so the selection was culled from a mix of my professional experiences as well as from collaborative talks with other artists working with these ideas. Furthermore I wanted to mix well known artists, such as Dan Perjovschi or Santiago Sierra, as well as lesser known artists like Clemens Wilhelm or Qi Zi from China.

What were the contrasts between the way language was used in terms of revolution?

JH: In the process of planning and creating, it turned out it’s not necessarily the cultural point of view but more the the treatment of an idea of language and revolution which I found the most striking. On the one hand you have artists like Clemens Wilhelm from Berlin, who focused on a very nihilistic message saying “Macht Nichts,” which has a two meanings in German: ‘Never mind!’ as well as ‘Don‘t do anything!’ He used the very slick aesthetic of political advertising, such as print buttons, wall papers, and flying over Berlin with an airplane to display a message that is in itself denying consumption and even activity. 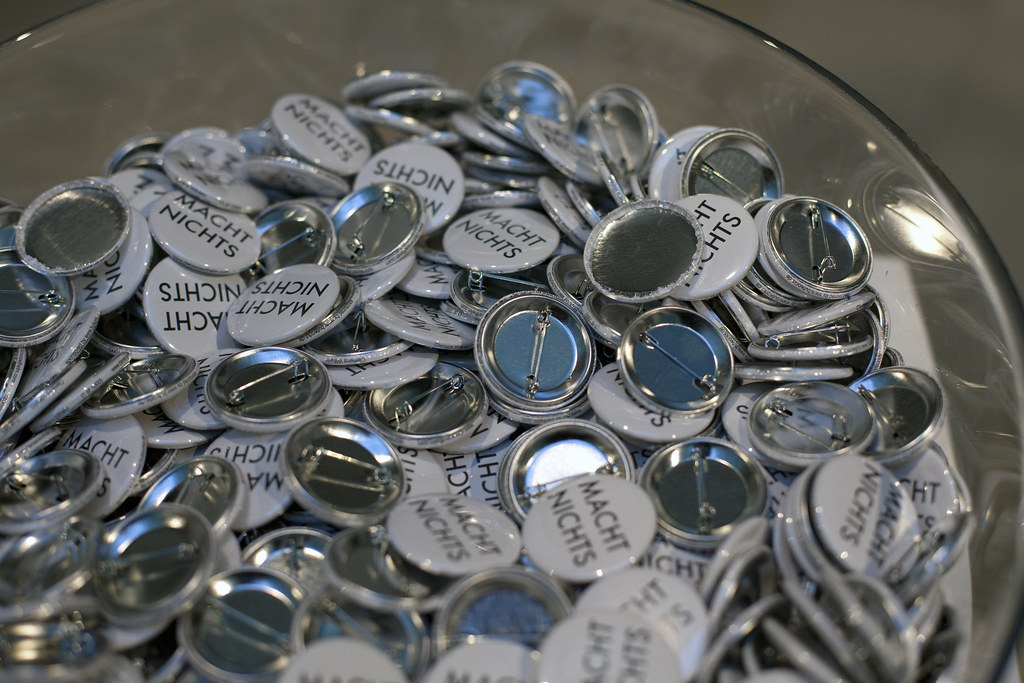 And then there’s Santiago Sierra’s “No Global Tour”, who went on a road trip and documented it with video, traveling through different cities with a truck carrying huge letters spelling out “NO.”
Nadia Kaabi-Linke from Tunisia, just used imprints of people in front of the palace of the Tunisian president, shortly before the change of government. She used forensic techniques and materials combined with glaziery methods, finding traces of people. In this way her work is a very direct and unfiltrated imprint of people’s expressions, referring to the concept of the index in photographic theory.

What about the use of technology? There’s quite a variety in the use of mediums, from Qi Zi’s paper sculptures to Constantin Hartenstein’s use of high resolution projectors.

JH: Of course the technology or rather the medium that transports the language is important, Qi Zi and Hartenstein use a very different idea of language, for instance. Qi Zi, who comes from China, used small pieces of cut up dictionaries to form small sausages, creating a sculpture which is a metaphor for the non-language of people that live under dictatorial conditions. Constantin Hartenstein, on the other hand, used technology to collect the messages of the Occupy Wall Street Movement in New York and beam them onto a protest sign, commenting on the press’ widespread discussion that the OWS movements was a diffuse one, even though it was in fact very well organized through the Internet. 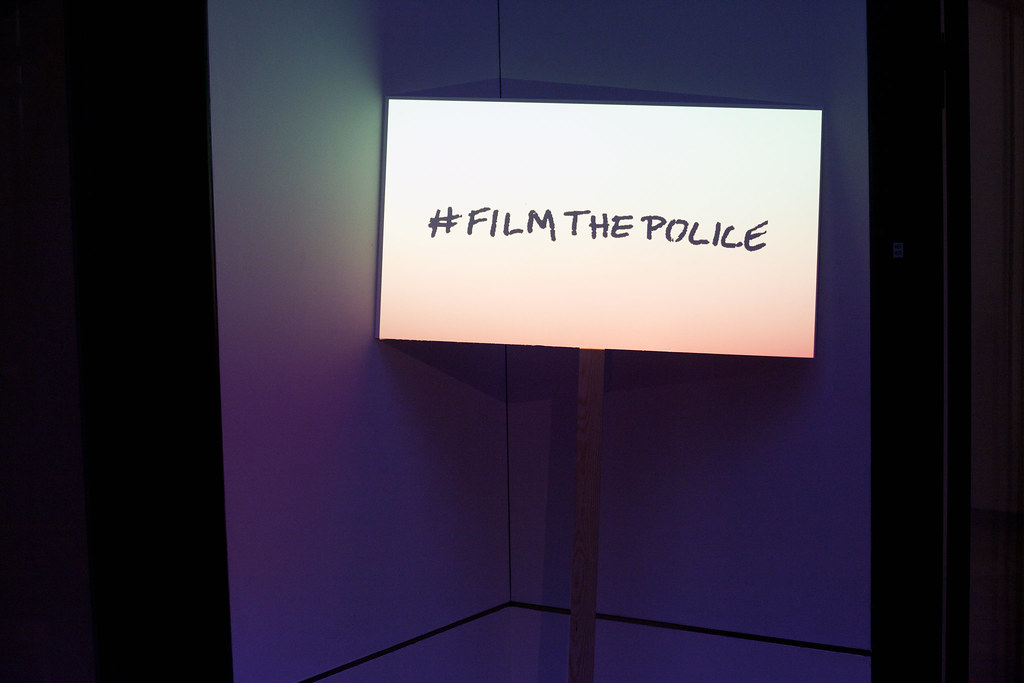 Did you see a common thread between all these movements with regard to the artists’ works?

JH: I think my idea wasn’t really to compare the movements, but to compare the different ways of reflection on language and political messages. The funny thing is that the diversity of movements and nationalities that are featured in the exhibition are also mirrored by the diversity in the mediums used by the artists; But to put it more politically: there is something different in the work of artists from the Arabic countries, or the ones where the dictatorships exist. They use a more emotional tone, act with a greater force, whereas the Western artists, who live in situations where the political pressure is much more subtle, tend to work more with the aesthetics of covered manipulation of existing structures like advertisement.

— The exhibition “Languages of Revolution” is now open until May 22nd at Kleine Humboldt Galerie, Lichthof in the East Wing of Humboldt University, Unter den Linden 6, 10117 Berlin. Opened Wednesdays to Fridays from 12 to 6pm.

A Short Guide to: Gallery Weekend

Art in Berlin: Kapoor in Berlin

WeShare Made in Berlin: Tiergarten Kieztour