Julian Zigerli (28, left) is a young menswear designer from Zürich who joined forces with Berlin based artist Fabian Fobbe for his new collection called „My Daddy was a Military Pilot“. Truth is, his father was a military pilot, flying a Mirage for the Swiss army. His picture adorns the invite for the presentation last week in Kreuzberg.
While Zigerli created the cuts, Fobbe worked on prints, and the result is an erratic mixture of rigorous shapes, numerous velcro and silk in the colors of the rainbow. I talked to them about the inescapable reference Top Gun, radiating air and sharks.

Mary: How did the collaboration develop?

Julian: I‘ve had the title and topic of the collection very early, when I discovered pictures and small airplane models at my father‘s office. I know Fabian through my good friend Linda, with whom I studied at UdK Berlin. I stayed at their house last fashion week season and was surrounded by his beautiful pictures. I‘ve always liked them, also the way he works and that‘s why I just asked him.

Mary: And how did you react?

Fabian: I was very happy about it, I‘ve always wanted to do textile prints. And of course I thought the topic was exciting, to approach combat flying on an atmospheric level.

Julian: It‘s not about the military. It‘s about the pilot and what happens in the cockpit while flying, the power the airplane develops, the supersonic speed and the clash of so many elements.

Mary: However, the colors are rather psychedelic, as if the pilot would be on a trip.

Fabian: We started by exchanging photographies on the topic, especially of the sky. Clouds, dawn and its colors, that‘s how the colors emerged. It later developed into the whole rainbow spectrum.

Julian: Water and waves where an important motif, pilots fly a lot above water. Of course this also stems from the movie Top Gun with Tom Cruise, it‘s got great image of the air craft carrier and the machines.

Fabian: Yes, and great pictures of the bombers in the air.

Julian: And the water reflects beautifully.

Fabian: And the air radiates because of the heat. That‘s where the prints come from, they are derived from a reflecting water surface, which I then abstracted and edited with the computer.

Julian: In this collection there‘s the color spectrum of the dawn as well as of the dusk, when the sun sank and the light of the moon is mirrored in the water. 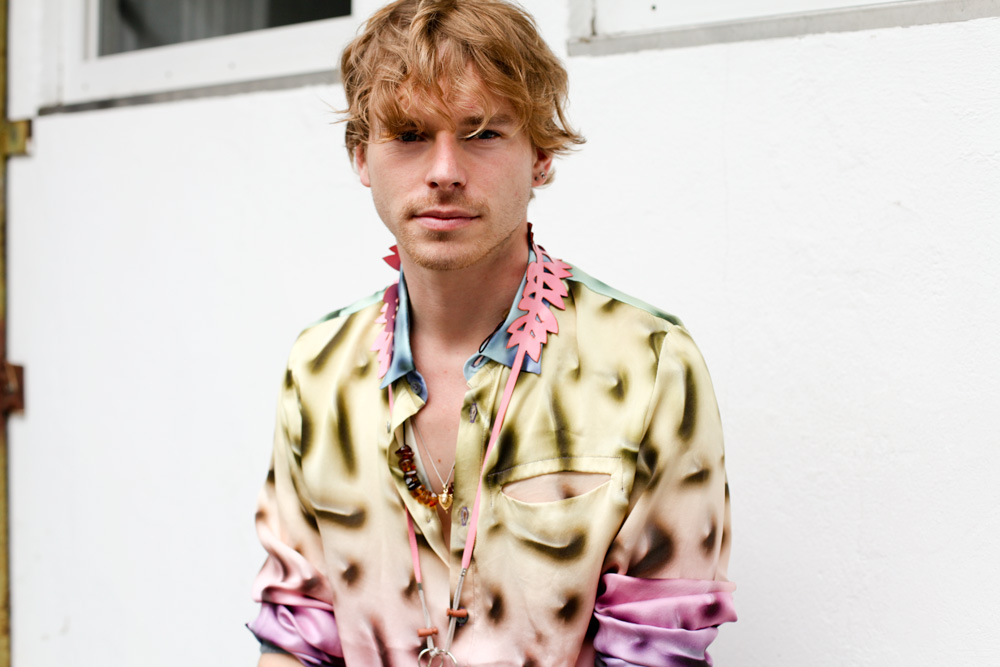 Mary: Are the technical, neoprene like fabrics also based on the military?

Julian: Not necessarily the fabrics, but there are many other references. I had the jumpsuit of my father in my studio while working on the collection, it has velcro everywhere, to fix the map or what ever. The cockpits are supersmall and everything needs to be very easily to get while you‘re doing supersonic speed. The whole topic is rather male, there are only few female aspects, but through the elements of air, water and earth we eventually came up with the shark and his light grey skin, that I then used as a color.

Mary: Well, the military troop frenzy does carry a certain homo-erotic vibe. However, your interpretation might even be called „gay pride“ version of the motif, you‘ve added sequined bags, hearts and rainbow colors to military shapes, which is a clash.

Fabian: The military has served as a starting point, but we‘ve been going into a more atmospheric, elemental direction. In my paintings I am combining technical elements, accurate geometric forms with color fading with gestural painting and dropping color.

Mary: Your woven fabrics are rather organic as well.

Julian: I do love technical fabrics as much as I love natural fibers. The pattern Fabian designed is printed on silk and on the neoprene like fabric. While they look alike, these to fabrics are very contrary.

Mary: Fashion and art rarely meet in an effective manner, since the reception of each is different, although fashion likes to gain importance by joining with art. How did you experience this encounter?

Julian: The working progress of art and fashion is indeed similar and we wanted to see, what happens if we join both worlds.

Fabian: There is the fear of contact between both, which I find hard to understand. Four our presentation we invited his as well as my contacts, because we like this kind of mixture.

Julian: I was not once in doubt, that the presentation should be with both our works together. And I thought a gallery would be great, since you can put my models and collection everywhere, but art works best in a gallery space.

This interview was done for and first published in German by Monopol Magazine.

dOCUMENTA(13): On seriality – or pausing with painting

On the Runway: Julian Zigerli Summer 2014